Good Vibes: Where is the Soul-Inspired Music Pt.II 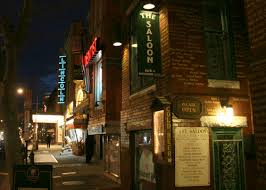 I had quite an adventurous night in the Historic U Street Corridor, yesterday evening. To avoid accumulating anymore parking tickets in front of poorly labeled and misleading meters, I took the subway into town. I love taking the train. I never felt more inspired than when I would travel the 2-train from White Plains and East Gun Hill Roads in the north Bronx to Downtown Brooklyn. Witnessing the changing demographics of the riders as you humped through Manhattan put you into a certain frame of mind. It connected you to the soul of the City.

And I often get a taste of that when I ride through DC’s own, much more limited yet cleaner, metro system. I never wear headphones on the short trip to U St. from College Park or Hyattsville. I want to soak in the urban ambiance (wow…I don’t think I’ve ever sounded more suburban in my life!!!), unfettered by technology blocking my senses. I’m in search of a new perspective and to be put into a certain frame of mind. I want my spirit lead by DC’s soul!

The plan for the evening was to attend a mini-concert by a local, independent artist, Jsoul. I was perplexed by what I saw when I entered the establishment a half hour after the show was to begin. People were dining and enjoying the conversation of others. You wouldn’t be able to hear each other speak if there was a concert going on! I pulled a waiter aside and asked him what was up. Apparently, the concert was held Tuesday night. It was now Wednesday!

Well, one thing DC does not lack is live music venues. I remembered that a wonderful artist performed every Wednesday night at a restaurant a few blocks away. So, I tightened my shoe laces and strolled down to my sure thing.

I could hear the muffled sound of her voice and the band rocking before I even got to the door. The singer’s name was Colie Williams, and she was backed by a father and son on bass and keys, in that order, and another brutha on the drums. A good friend hipped me to Ms. Williams when I first got back to the DMV. I was warned that Colie’s vocal style was a cross between Teena Marie, Billie Holiday, and Jill Scott, depending on what brand of music she was belting out. My friend hadn’t lied!

As I sat there sipping on a tall glass of Ginger Ale, nodding my head to some of Colie’s original tunes, I was struck by the answer to what perplexed me just last week…”Where is the Soul-Inspired Music?”

The music I sought to give me chills was right here! Yes, I found it in the lyrics and the composition of the music. But more than anything, it was the sound…the feeling…the intimacy of the live performance.

From my experience, there’s nothing like live music, especially in intimate settings. There’s something I find “Soul-Less” about watching a singer perform to a pre-recorded track. For one, there’s so little room for improvisation. But most of all, it lacks the interplay between the singer and the musicians that elevates the quality of the performance. The vibe they develop often leaps from the stage and engulfs the entire audience.

Records and radio stations have their place. For thousands of years, the only way you could hear music was to witness it live. But recorded music made its enjoyment more convenient and accessible. Now, though, most of us only get to experience music that is recorded.

But if you want to feel chills (I still feel mine), then you need to get a little live music in your life…

…just make sure you know the train schedule, so that you don’t find yourself standing in front of locked gates at your station, having missed the last train home. Then, you won’t have to be bothered by heroine addicts trying to sell you bootleg, Nigerian DVDs in the middle of their drug-induced nodding, snacking on a fresh fruit cup bought at the corner bodega at two in the morning, while you wait for your mommy to come pick you up!!!

Good Vibes: The Art of Appreciation

Good Vibes: The Beauty Of The Duet

Good Vibes: A Premiere with A Tribe…

Kings of the Heart Podcast