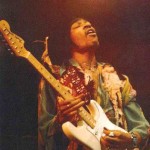 In the second season of The Chappelle Show, Dave did a hilarious sketch about how white people can’t dance. But he had a theory. It wasn’t that white people couldn’t dance…it’s just that they only respond to electric guitar. And in the sketch, he went about testing his theory with the help of John Meyer.

As a control test group, Dave took John to a barber shop in Harlem and let him play a few riffs for the barbers and their patrons. The all black and Latino “control group” responded with looks of disgust, until eventually one of the patrons told John, and his guitar, to “Shut the F@#% Up!!!”

As brilliant as that sketch was, I found something troublesome about the whole premise. Black folks don’t like the electric guitar?!

How can this be? Some of the meanest electric guitar players were and still are black! Chuck Berry, Bo Diddly, BB King, Wes Montgomery…!

With this theory swirling around my head, I immediately went to my music collection and put on some Jimi Hendrix. As I listened to the brilliance of this man and the way he made his instrument talk, squeal, and holler, I started thinking about the brutha who would rock Jimi tee-shirts in high school. We all looked at him like he was a weirdo…some sort of alien, even!

But he obviously understood something that the rest of us didn’t get at the time.

When did our culture, as a whole, fall out of love with the electric guitar? In asking some of the older brethren of color, they would say that black people never really dug the electric guitar that much…that Jimi was looked at as a weirdo, himself, around the way.

One of my elders pointed specifically to the Motown Sound that was so positively pervasive in the 60’s and 70’s. Even though their was an electric guitarist within the Funk Brothers, the instrument was not often featured on many of the Motown hits. The sound that came to define our post-civil rights culture, and the artists who created it, relegated the electric guitar to the background. James Brown, one of the most influential artists of the 20th Century, notoriously kept both Jimi Hendrix and Bootsy Collins stuck within the mire of his rhythm section.

Even though black people and Rock-n-Roll have this wonderfully interwoven history, it seems that for many there has always been this love/hate relationship. Overall, black people rejected the music and it’s shining symbol, the Electric Guitar. And those in the culture who embraced it were pushed to the fringes!

But that hasn’t stopped black folks from continuing to experiment with the genre. In Living Color kept black rock alive in the 80’s, Tracey…I mean, Ice T and his group, Body Count, were met with great controversy in the 90’s, and Mos Def and Lil’ Wayne have both ventured into the Rock realm since the turn of the century.

Seriously, can you imagine the state of music had Prince, Lenny Kravits, or Rick James not touched an electric guitar?

I just hope we never turn our backs on the electric guitar, and if it’s up to contemporary musicians like Curt Chambers (see video below), we never will!

Good Vibes: The Art of Appreciation

Good Vibes: The Beauty Of The Duet

Good Vibes: A Premiere with A Tribe…

Kings of the Heart Podcast